While it doesn’t take sophisticated tools to figure out that beer and summer music festivals are a match made in heaven, pairing the right event and brand to secure a strong ROI is a bit more complicated.

Helixa’s data shows that certain music festivals can offer beer brands a more perfect union. Understanding the attendees and how they relate to specific brands is important, and it’s equally valuable to consider where they are returning to at the end of the weekend. This allows the conversation to continue after the event, wherever they call home.

We took a look at three major music festivals to determine which one would be friendliest to up-and-coming beer brands. Though Bonnaroo, Coachella, and Lollapalooza engage somewhat distinct crowds, they seem to have similar motivations for attending, beyond just the music. 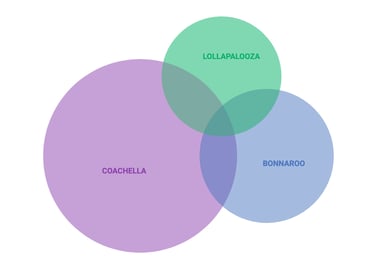 Compared to the average American adult, all three festival audiences over-index for partying and music, but ironically, music is  less of a draw than the social aspect these festivals provide. Specifically, Bonnaroo fans are four-and-a-half times more likely to be categorized as party animals than the average person and have a very high affinity for social drinking.

However, assuming Bonnaroo fans are just chugging beers between sets for a quick buzz misses some important details. They are twice as passionate about craft beer than Coachella attendees. Taking it a step further, our platform can dig deeper to look at what those top craft beer brands are at Bonnaroo or any of the other festivals. 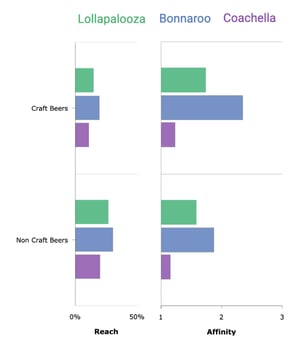 After the roadies pack up

After spending valuable resources connecting with festival attendees, it’s crucial to stay top of mind after they return home. Brands need to keep the channels of communication open and show up in their local stores before the festival high wears off.

Luckily, Helixa’s data can break down the top metro areas for each festival audience. For example, Bonnaroo is the least local of the three, with 90 percent of the audience driving at least three hours to Great Stage Park. Additionally, most of those attendees are heading home to urban counties, where brands can expand their customer base. 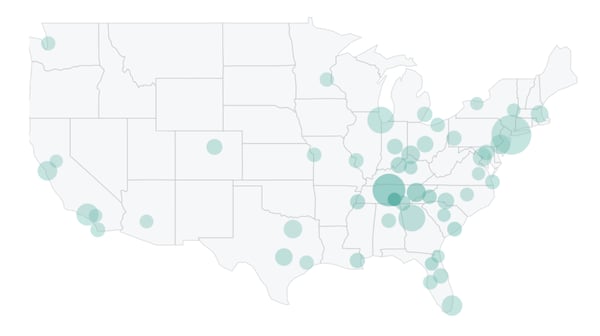 Choosing the next headliner

All the data points to Bonnaroo as the most receptive festival for craft beer brands. So, whether you want to go for the low-hanging fruit or penetrate one of the other festivals to increase your market share, Helixa provides the data to help you decide.

Plus, you can export all of the data in several standard formats, so the entire analysis and reporting process is over quicker than a drive to Bonnaroo.