With the wave of nostalgia that is washing over Gen Z, can Square Enix use Rebirth to tap into this trend? Or is Final Fantasy itself part of the wave? Let’s take a closer look at the Final Fantasy audience and see if their Gen Z fanbase loves the classics.

The Final Fantasy audience is overwhelmingly male, which holds true for Gen Z, with 87% of the audience being men. As expected, Gen Z Final Fantasy fans are Gamers and Nerds but, interestingly enough, are also Design Lovers, meaning they have a passion for design and modern art. With the game franchise having imaginative exotic locations, it makes sense why this fanbase has more of an artistic eye. 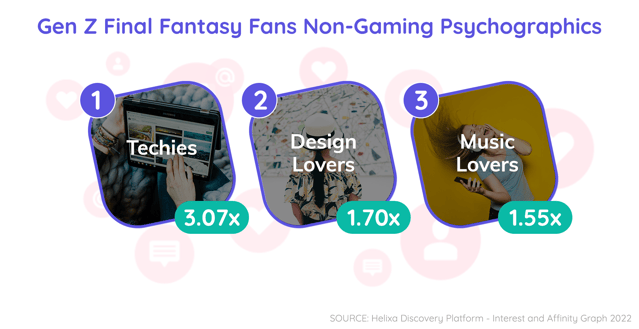 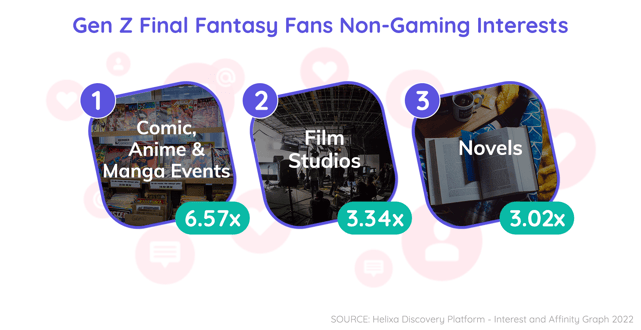 For Final Fantasy’s 35th anniversary, they partnered with the clothing retailer Uniqlo to release special edition shirts for each game in the series. It’s safe to say: the partnership definitely paid off for Uniqlo. The Gen Z Final Fantasy audience is seven times more likely to engage with Uniqlo online compared to the US population. This partnership helped the retailer connect with younger audiences and gain more of a following from Final Fantasy fans. But ultimately, Gen Z’s love for nostalgia is an opportunity for classic clothing brands to engage with this generation. 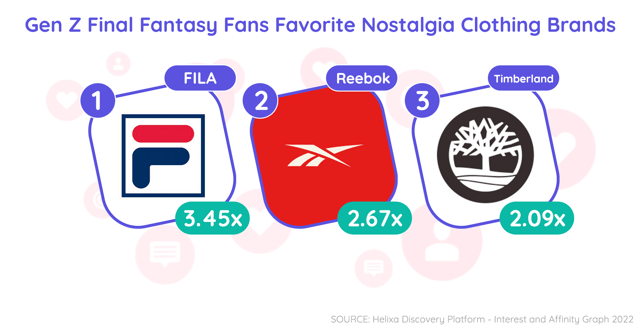 Gen Z Final Fantasy fans love nostalgia clothing brands, but their affinity for Uniqlo, a modern retailer, is much higher. So it looks like fashion retailers, whether new or nostalgic, could benefit from partnering with the resurgence of vintage game franchises grabbing Gen Z’s attention. The partnership with Uniqlo shows that Final Fantasy’s Gen Z audience is excited to try out brands that the franchise works with.

What better way to celebrate a 35th anniversary than grabbing the attention of a new generation that will carry on the legacy. By using a data-driven approach, Final Fantasy can lean into Gen Z’s soft spot for nostalgia, and Square Enix will continue to grow its younger audience with the upcoming releases of both Final Fantasy XVI and Final Fantasy VII: Rebirth.

However, the biggest takeaway is the Gen Z audience’s enthusiasm for partnerships that feature their favorite nostalgia brands. As we’ve seen with high fashion brands getting in on the gaming world, the lines between categories continue to blur, creating very lucrative growth opportunities if your data holds.

By introducing strategic partnerships, the Final Fantasy franchise can continue to expand its audiences, create buzz for its new releases, and keep its legacy alive for generations to come across categories.

Want to reach Gen Z and tap into their $360B disposable income? This digital-first generation is finally coming into their buying power, and their influence is here to stay.

Our new report takes a look at the best ways to reach and connect more effectively with these digital natives, the future of consumer behavior.