Brands try their best to have personalities, but the personality of the consumer drives many marketing decisions. MRI recently released a product to help advertisers understand the intersection of product preferences and personality, something Helixa has been doing on a finely detailed level for some time using social data.

The Big Five personality model is a well-studied framework used in the field of personality psychology. The model categorizes human personality based on five factors: Openness, Conscientiousness, Extraversion, Agreeableness and Neuroticism (OCEAN).

Openness to Experience: Measures a person’s level of creativity and curiosity. The two opposite behaviors for this dimension are:

Conscientiousness: Measures a person’s level of organization and work ethic. The two opposite behaviors for this dimension are:

Extraversion: Measures a person’s level of sociability and enthusiasm. The two opposite behaviors for this dimension are:

Agreeableness: Measures a person’s level of friendliness and kindness. The two opposite behaviors for this dimension are:

Neuroticism: Measures a person’s level of calmness and tranquility. The two opposite behaviors for this dimension are:

Academic studies have shown that marketing messages which reflect the personality traits of their audience are more effective.1 You’ll often find that a target audience clusters around certain Big Five personality dimensions more than others, which can inform what types of messages are likely to resonate with them.

An audience which scores high in Openness is more likely to be motivated by aesthetics and intellectual pursuits, and will respond well to images and words that communicate innovation, intelligence, sophistication, imagination and creativity.

An audience which scores high in Conscientiousness is likely to be driven by a desire for order, efficiency and achievement, and will respond better to marketing messages that tout functional benefits and informational ads (e.g., highly cognitive ads that provide factual, relevant brand data in a logical manner).2, 3

An audience which scores high in Neuroticism is likely to respond well to messages that make them feel safe and secure.

Helixa has developed sophisticated predictive models that calculate Big Five personalities based on interests observed through social media interactions. The predictive models were developed using data from ~10,000 participants who have opted to take the Mini-IPIP test, an abridged and highly effective version of the Big Five Personality questionnaire, and allow Helixa to collect their social interaction data.

First, we grouped the participants’ engagement with different social media pages and content into different interest categories (e.g., books, online games, fast foods). Then, we built five different linear regression models to estimate each of the Big Five personality traits using these interest categories as independent variables. Once validated, these predictive models were applied to our larger consumer sample to calculate their Big Five personality traits.

These models are all available to users of the Helixa insights platform, whether or not you subscribe to MRI.

The results of the Big Five personality analysis are presented in both table and graphic formats. The table shows the affinity, reach and penetration for each of the ten behaviors for your target audience, and the graph demonstrates the same information visually to help you quickly see where your target falls along the Five Personality dimensions. 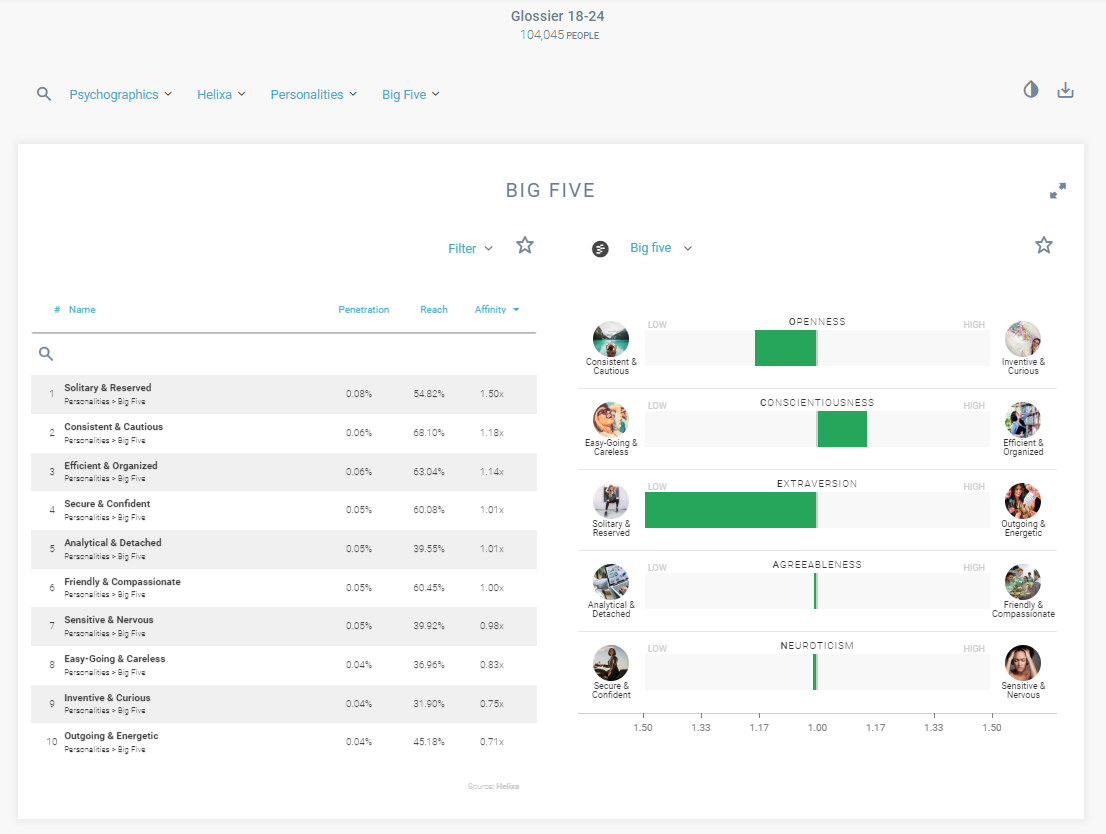