The NFL recently named three official sports betting partners for the very first time, leading many to speculate on how the shift would impact the at-home viewing experience.

Now, sports gambling is a tradition as old as the sports themselves, but this is a big step in mainstream acceptance and great news for the folks who weren’t willing to Venmo a bookie under the table to place their bets (not that it ever stopped my friends).

This NFL season will see many first-time bets as a result. Yet, the league claims this change won’t be felt in the broadcast, at least for now.

Maybe it should! Not only do NFL fans engage with gambling services more often, but it also wouldn’t hurt the league for fans to have more skin in the game — especially as major league sports deal with declining ratings across the board.

Before we make the case for this change in strategy, let’s start by exploring how we got here.

A short story within the long history of sports betting

When the Professional and Amateur Sports Protection Act (PASPA) was struck down in 2018, it opened the floodgates for the current wave of legal sports betting in the U.S. Within just six months, seven states legalized sports betting, followed by a second wave in 2019.

Now, sports betting is legal in 25 states, with Arizona opening to coincide with the 2021 NFL Kickoff.

But, to fully understand the current landscape, you need to go back a bit further. Before sports betting was legal, two major services were launched so people could gamble on Daily Fantasy Sports (DFS): FanDuel in 2009 and DraftKings shortly after, in 2012.

These services exploited a legal loophole where paid fantasy leagues were not required to run the length of a full season and could be played daily. After their emergence, these two services quickly became the two frontrunners and grew exponentially over the next several years, even drawing investments from several major sports leagues.

When states began to fully legalize sports betting, these services were ready to leverage their massive audiences and launched two of the premier online sportsbooks in the country.

Then, the NFL legitimized them even further in April by making them two of the league’s three inaugural sports betting partners. The other official partner, Caesars, also had an advantage due to its home in Las Vegas where sports betting has been legal for ages.

This choice paves the way for more integration between gameplay and betting, but what do the fans at home want to see?

This strategic shift is a good bet

When you take a look at the NFL audience in the Helixa platform, you can see why the league was open to embracing sports betting. The audience is 41 percent more likely to fall into our “gambler” psychographic than the average U.S. adult.

And this interest only grows more pronounced when you look at the services that are specifically tied into sports betting. 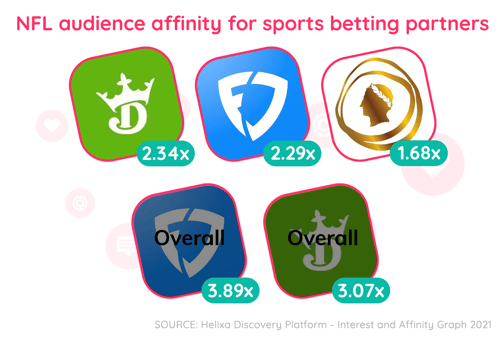 The interest in DraftKings and FanDuel’s sportsbooks within the NFL’s audience is more than double the U.S. average. When you look at the overall offerings from each of those companies (which also include the daily fantasy sports mentioned above), interest is triple the average American adult.

So, we’ve established that the league’s audience is more prone to sports betting and, for the most part, open to these partnerships and possible in-game integrations. But to sweeten the argument, let’s look at one more metric.

Percentage of audience engaging with the NFL 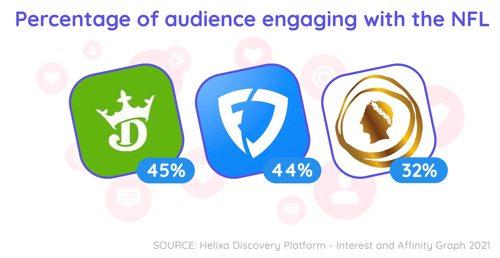 Using our penetration measure, we can see what percentage of these services’ audiences are engaging with the NFL. The audiences of DraftKings and FanDuel’s sportsbooks, for example, both hover around 44 percent engagement with the NFL.

Those are strong numbers, but they still leave a full half of each audience that is betting on other sports and not engaging with the NFL. The possibility of capturing these new fans is an even stronger argument to integrate betting spreads and odds into the broadcast format.

People who care about gambling, either casually or seriously, are perfect candidates for the NFL to capture through in-game integrations of sports betting spreads and stats.

And, vice versa, viewers at home might be interested in betting through these integrations and join these apps, giving them a reason to watch more games that don’t feature their chosen teams.

When we look at an audience interested in gambling, but not the NFL, we can gather some interesting insights.

The audience engaging with the NFL doesn’t stray far from U.S. averages in each age bracket, but the audience of gamblers who don’t yet engage skews much older. While the league is making a concerted effort to reach younger audiences, these older viewers have more disposable income and in the later years, a lot more free time. 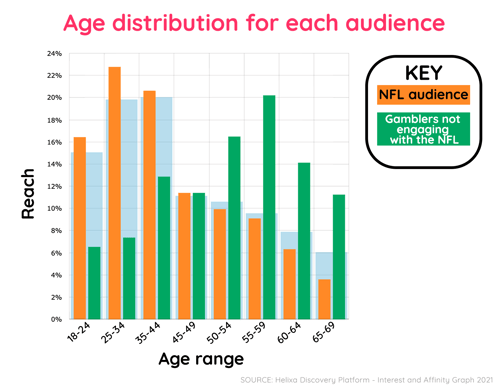 Despite being much older than the NFL audience, the gamblers who don’t engage with the NFL are much more likely to be casual gamers, clocking an affinity score of 7.27x in comparison to the NFL at 0.89x. It’s possible that video games are a better way to reach them at first, with their favorites being racing and sports games.

Additionally, they are big sports fans, social drinkers, and partiers. If the NFL could find some way to tap into the community camaraderie of the sport, they may be able to win these gamblers over from other leagues.

And with their love of gambling, sports betting is bound to be a part of that equation.

Sports betting continues to grow, and it’s here to stay

While sports betting has only been legal for a few years, it has a long and storied history behind it — and in front of it.

As the ease-of-use entices more and more fans to try their hand at those first few wagers, it will only grow in popularity.

Instead of moving on with the status quo, the NFL (and other professional leagues) should embrace sports betting as a new tool in their arsenal. It could help them engage current fans in new ways and bring first-time fans into the fold.