You can’t talk about the Olympics without mentioning partnerships. It seems like anything at the games can be sponsored — including the athletes — and ad spots go for millions.

With so much riding on every decision, you need to make sure you know how your specific audience will react to your Olympics activities. While it may seem like the entire country tunes in, that’s not actually true. And the ones that do are motivated by different reasons or interests.

I took a look at the Olympics audience in the States, along with some data-supported brand partnership opportunities. While the decisions are already made for this year’s games, these insights and the processes for discovering them are applicable to any event with widespread appeal.

To get started, we need an understanding of the U.S. audience engaging with the Olympics. I looked at an audience of anyone who is interested in either the official Olympics account or the NBC Olympics account.

Demographics are a great place to start. They provide an opportunity to validate what we already know about the audience while opening the opportunity to see how our assumptions might be off.

While the Olympic audience matches up with U.S. averages, demographically, they differ in a few key areas. To start, the Olympics audience skews more toward women than men, at about a 60/40 split.

When we look at the intersection between age and gender, we see that the female fans are slightly younger than the male fans. Overall, though, the 18-24 age bracket is the most engaged. 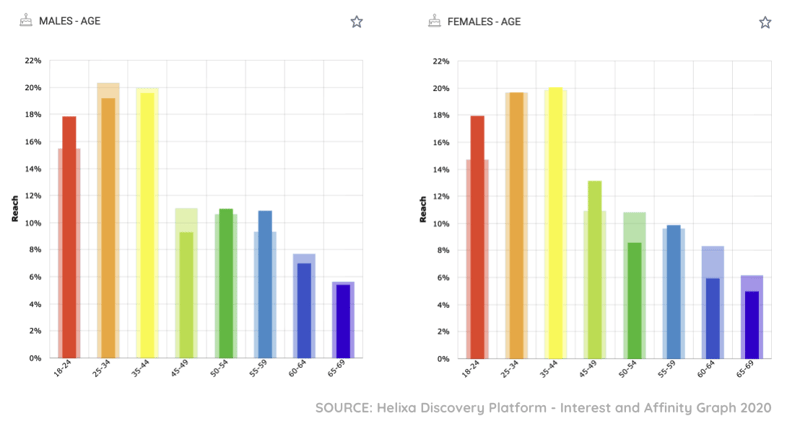 Regionally, the Olympics audience matches up with U.S. averages, and other demographics like race, education, and ethnicity follow the same trend. This makes sense for such a widely viewed event.

However, things got interesting when we noticed that individuals who have a household income of over $200,000 are 1.27 times more likely to be interested in the Olympics.

This higher income bracket could be a good insight to keep in mind when thinking about sponsorship opportunities and creative strategy. Not only will it impact the types of companies that want to advertise during the event, but also how they could more effectively position their products and messaging.

While those track for a sports event audience, I also found that our Olympics audience is 1.49 times more likely to be Entertainment Junkies.

This tells me this audience is likely to be just as interested in the buzz around the event and the athletes as they are in the games themselves. So it’d be a good idea for the broadcast to keep up the usual mix of sports and human interest stories.

The right to compete in the Olympics for your country is a priceless honor. The right to broadcast the game back home, however, clocks in around $7.75 billion for NBC Universal. Turns out you can put a price tag on national pride, but I digress.

While writing this post and reviewing sponsorship opportunities, I read that Toyota decided not to advertise during this year’s event, because of low approval ratings related to COVID-19.

Interestingly enough, the Olympics audience in the U.S. is lacking an affinity toward Toyota, clocking in at 0.66x, under-indexing Toyota also has the 12th highest reach amongst all car manufacturers when it comes to this audience, so pulling the ad spend was probably wise, at least in the U.S.

There is another Japanese car manufacturer that has both a higher reach and affinity among the Olympic audience than Toyota: Nissan. The U.S. Olympics audience is actually 1.16 times more likely to be interested in Nissan than the average U.S. adult.

When I dig into the Helixa platform, here are some of the other top brands for the Olympics audience, by category:

While the spots are all bought for this year’s Olympics, these brands could look to 2024, or apply this type of analysis to any major event.

A more complete audience view can help you more effectively capture their attention with strategies that speak to actual interests and motivations.

One brand that is almost synonymous with the Olympics is Wheaties. Wheaties uses their cereal box to showcase both current and retired athletes, and every Olympic event brings a new chance for an athlete to grace the box. 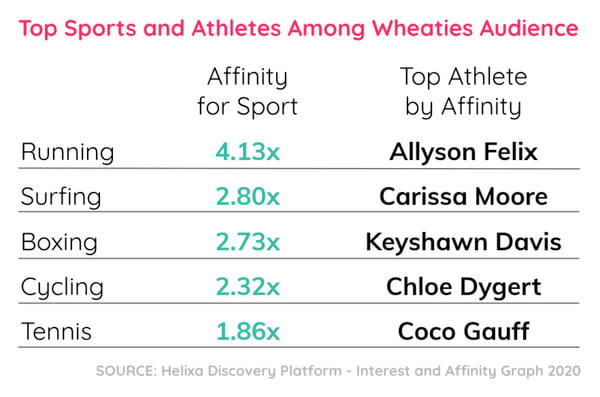 Breaking out each individual sport, we can look at the Olympians with the highest reach and start to make predictions about the best choices for the Wheaties audience.

As with the Toyota announcement, there is always a chance that COVID-19 could throw a wrench in the frontrunners. For instance, Coco Gauff had the highest affinity among Tennis Olympians but she had to drop out.

However, barring any other removals, Allyson Felix has the highest affinity from the Wheaties audience — it’s hard not to root for a 5-time Olympian. It would be Felix’s second time gracing the box.

If Wheaties is looking for a first-time appearance, we could see surfer Carissa Moore and cyclist Chloe Dygert being solid choices.

Sure, it’s helpful to know that you’re one of the top brands among the Olympics audience in the U.S. But if you drop millions on an ad buy before understanding how your specific audience will react, you’re taking an unnecessary (and expensive) gamble.

Why leave so much up to chance and old assumptions when there are new and accessible ways to peek behind the interests and feelings of your audience, understand their motivations, and meet them where they are?

For example, is your audience watching gymnastics or track and field? Is your audience overlap with the Olympics as representative as the general audience, or are specific demographics tuning in more than others? And, most importantly, what else do the people in that overlap care about?

Obviously, the ads for this Olympics are bought and paid for, but answering questions like these will make the difference in your overall return when investing major cash around any big event. AI-powered audience intelligence like Helixa can help you answer all of the above.

Want to learn more? Reach out so we can schedule a quick chat.