When it comes to hockey players, we can make a few assumptions: a few missing teeth, envy-inspiring hair, and the ability to talk exclusively in cliches. Trust me, I’m Canadian.

Hockey fans share a lot in common, on the surface. Within that audience, though, they diverge in subtle but important ways. If you segment them based on their team, region, or even other interests, the differences start to emerge.

And when you’re trying to reach a group of audiences united by shared interests, those differences matter. Whether you’re looking at sports teams in a league, artists on a label, or even beer lovers who prefer different brands, you’ll miss the mark if you paint with a broad brush.

To demonstrate, I’m going to analyze the media choices of hockey fans and explore the best ways to meet them where they are.

As in most sports, hockey media can be thought of in three categories: the major networks, insiders and reporters, and influential fans and ex-players who create related content.

There are obviously some overlaps where the lines blur a bit, but I think this framework is a solid way to organize our thinking. 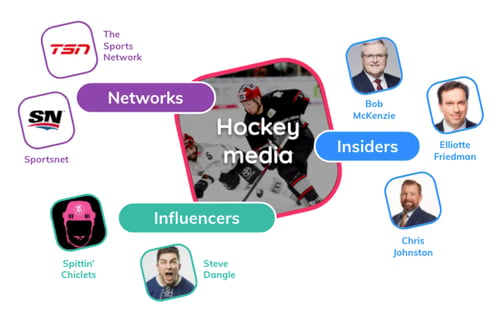 Using the Helixa Advanced Analytics platform, we can look at the broader audience of Canadian hockey fans. Around 40 percent of Canadian NHL fans are engaging with The Sports Network (TSN) and Sportsnet, the main sports broadcasters up north.

Retired insider Bob McKenzie, on the other hand, has 58 percent of the Canadian NHL audience, and a larger share of the overall Canadian audience as well. It would appear as though certain influential insiders can actually eclipse the reach of the major networks — an insight that could seriously impact the results of a media plan. 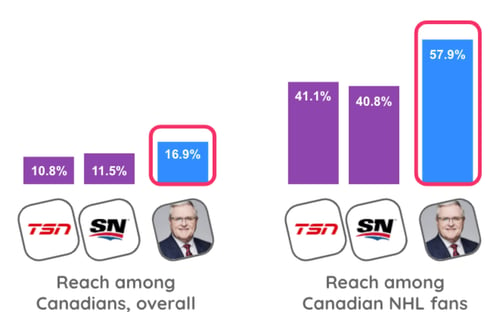 And there’s also the network of comparatively niche podcast and YouTube influencers who discuss hockey. These smaller players are not to be ignored.

Barstool Sports’ Spittin’ Chiclets, for example, captures a younger audience than TSN, globally, and would be a great way to reach dedicated fans in both Canada and the U.S. with an emphasis on fans in the states.

Get the puck in deep with one specific team

So, we have established some benchmarks for Canadian hockey fans as a whole, and I’m curious how things change when we dive deeper into a specific team. I’m going to examine Canadian fans of my Toronto Maple Leafs because it's less painful than a Game 7 against the Boston Bruins.

Immediately, I notice there is a drop in engagement with the national networks TSN and Sportsnet, when compared to the overall Canadian hockey audience. That change is reversed when you look at their engagement with TSN 1050 and Fan 590 — radio stations local to Toronto that focus on the Leafs and other Toronto teams.

This is a trend we see across the board with Canadian Leafs fans.

When compared to Canada’s broader hockey audience, Leafs superfan and YouTuber Steve Dangle sees an increase in reach with Canadian Leafs fans but Chris Johnston, the Leafs rinkside reporter for Sportsnet, does not.

But are other segments of the overall hockey audience as obsessed with their team as we are with the Leafs?

Compare the audiences like you’re scouting your next star

Turns out, this mentality does not extend to all fans — at least, not to the same degree.

Is it because no one cares about the Jets enough to steal their attention from the national network? I like to think so. Is Auston Matthews better than Patrik Laine? Obviously, yes.

While the Leafs fans in the States follow the Toronto stations and Leafs content more than the average American hockey fan, they also follow national podcast Spittin’ Chiclets and national hockey broadcasters in the U.S. at a rate higher than my fellow Canadians. 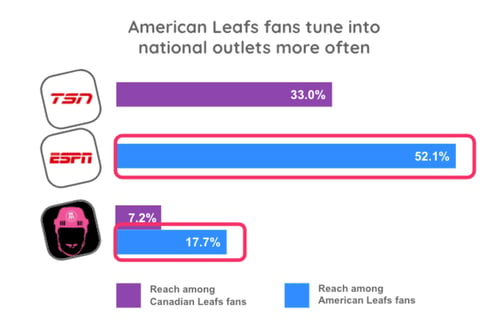 It would appear that they have a more balanced hockey media diet, despite wanting to go directly to the source for news on the Leafs.

Leafs fans in Canada vs Chicago Blackhawks fans in the States

With American fans of the Blackhawks, you can see the same effect as with the Canadian Leafs fans, but on a much smaller scale.

In fact, Blackhawks fans seem to be less engaged with national and team-specific sports media than the Leafs fans in either country. The insight here might be to reach them through the Blackhawks’ athletes (past and present), who have a much more significant reach among passionate fans of the team. 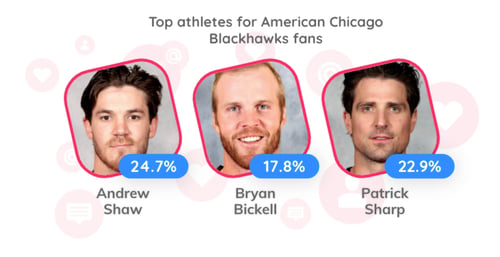 The added benefit of working with the athletes as influencers is the ability to break down each of their specific audiences in Helixa Advanced Analytics. You can see who has the most appealing audience to go after, based on what you need for your campaign.

All of these insights prove the importance of vetting all of your assumptions to avoid extrapolating the data. Even between two teams in the same league, there are often meaningful differences.

Ultimately, hockey fans have some things in common, but the ways they diverge are just as important. The real insight is made possible through an understanding of both the similarities and differences.

Now we have a more nuanced view of this audience and the way they interact with the sport they love. And this analysis could’ve segmented further by any attribute in our platform.

If you’re a brand looking to capture younger hockey fans, you can analyze the 18-29 age group for each team we looked at. Or, if you were at the NHL and trying to reach female hockey fans, you can look at their media preferences and other favorite things (which include all things Disney, uncovering a potential partnership).

Regardless of how you choose to analyze the audience, Helixa can help you get it done quickly and painlessly — I did this entire analysis in about an hour.

Alex is a Customer Success Manager at Helixa, where he leverages his analytics background to help clients discover and interpret surprising insights. In his free time, he can often be found trying to locate All-Dressed chips or training his phone to stop removing the letter "u" from words.