For Major League Baseball’s 2021 Opening Day, vaccinations and loosening regulations are bringing us closer to the roar of the game-day crowd.

But, if you listen closely, you can also hear the sound of cash registers chiming, as order returns to the network of important sponsorships that support the league.

Major League Baseball sponsorship revenue has risen every year of the 2010s, peaking at $994 million in 2019. There’s a lot of money involved, and surely a lot of research happening before these decisions are made. Plus, fragmenting fanbases are making sponsorships more challenging and opening the door for DTC and upstart brands to get a piece of the action.

To explore how we can help navigate partnership opportunities, I took a look at MLB sponsorships to see what insights I could find.

Some categories benefit from a team-level approach

Certain categories and verticals will lend themselves to national partnerships. For example when looking at banking, 29 out of the 30 teams had Chase as the bank with the most reach. But this isn’t always the case.

So I looked at a category that will likely have more regional implications: Beer. I analyzed the top beer brands by reach for all 30 teams in Major League Baseball. Looking at the top team by reach helps determine which beer brand reached the highest percentage of each team’s audience.

This could be a game-changer for some teams as beer sponsorships have implications from the commercials, to the signage, to the beer on tap in the parks.

Budweiser showed up the most, claiming the top spot for 14 of the lists. But, there were plenty of teams with other favorites: Sam Adams won in Boston, Yuengling in Philadelphia, and Dos Equis in Chicago, to name a few.

These wins don’t necessarily mean Budweiser is wasting its cash with a league-wide sponsorship — after all, Budweiser is consumed in all the fanbases, even if it’s not number one — but it does suggest that a regional or team-based approach could work well here.

When we look at individual teams, we can use affinity scores, which index each audience’s engagement against the national average. This can help us understand potential sponsorships at the team level.

Let’s look at two major MLB rivalries: The New York Yankees vs. the Boston Red Sox; and the St. Louis Cardinals vs. the Chicago Cubs. When sorting by affinity to see how each brand over-indexes, we get some interesting results.

Chicago, St. Louis, and Boston have a greater affinity toward nationally well-known brands. Meanwhile, New York is a surprising outlier that sees smaller local breweries rise to the top.

If you were going to develop beer partnerships for each of these specific teams, this insight would be something to consider, and the top brands from above would be interesting options.

When looking at national sponsorships that work well across the entire league, you still need to account for the differences that pop up in each team’s audience.

For example, Southwest is the top airline by reach for 25 out of the 30 teams, reaching a greater portion of those teams’ audiences than any other airline — even though it’s not a league sponsor.

But although the brand has a broad reach across the MLB, Southwest fans in each team’s audience differ in subtle but important ways.

Let’s focus on one of the above rivalries to demonstrate: Cardinals fans engage with Southwest at an average level, while Cubs fans actually under-index. So, even though Southwest  reaches the most Cubs fans, they are actually engaging with the airline less than the national average.

And when you look at the people engaging with Southwest in each audience, some key differences emerge that might impact the marketing. The following insights are based on their affinity scores (remember, that’s the index against the national average).

When looking at psychographics, Cubs fans are more likely to be thoughtful eaters and partiers. If you were running Southwest ads during a Cubs game, you might highlight the food and fun you could experience on your next trip (once you’re vaccinated, of course). For the Cardinals fans, you might want to lean into their love of the outdoors. 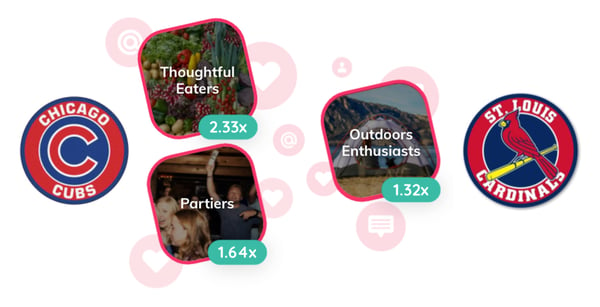 When thinking about how to reach them, you’ll want to take their media preferences into account. Both teams under-index in affinity for TV, movies, and magazines, but Cardinals fans are more likely to read newspapers, for example. A full-page ad in the St. Louis Post-Dispatch on a game day could be a good way to connect to the Cardinals fanbase.

Travel preferences could be another interesting source of insight for Southwest. According to Helixa data, Cubs fans are more likely to use online travel booking services like TripAdvisor, Expedia, and Kayak. When I ran Helixa's Total Consumer View, using MRI fusion data, it reveals that Cubs fans are more likely to prefer frequent weekend vacations over a longer one.

By understanding the key differences from team to team, even national sponsorships and campaigns can be adapted to specific audiences for a more effective strategy.

Segmentation is key for smart sponsorships

Audience segmentation is not new, But, its application can be tougher in partnerships if you don’t have the full picture of a potential partner’s audience.

Tools like Helixa allow you to quickly segment any audience you can build in the platform. This is perfect for partnerships because you can explore the overlap between your two audiences — or the opportunity of reaching people who fall into your partner’s audience but not yours.

Whether you look at each team’s specific audience for team sponsorships or segment the whole league by relevant characteristics, you’ll have actionable insights that will help you drive decisions to hit your business goals.

Rauxa even told us, "Working with Helixa helps us produce some of the most strategic work we've done to date."

To learn more about how Helixa can help with sponsorship and partnership opportunities, schedule a quick call.