One Order of Big Game Insights With a Side of Fries

One Order of Big Game Insights With a Side of Fries

Every year, February’s Big Game unites us over food, drinks, and pro football.

But this weekend, it was a lonelier affair, as social distancing kept us home from the usual sports bars and parties. Most of us were left to feed only ourselves and those we lived with.

When the Helixa team discussed our plans for the game, last week, we realized many of us were planning to fire up delivery apps in place of the traditional cooking and entertaining.

And of course, that left us wondering how many others would do the same. After a look through our data, here’s what we discovered.

Are viewers The Big Game's viewers ordering in?

To start, we took a look at the top restaurant delivery services among The Big Game’s past viewers. We defined this viewership based on self-reported data from our fusion with MRI-Simmons and only considered delivery services that operated nationwide. 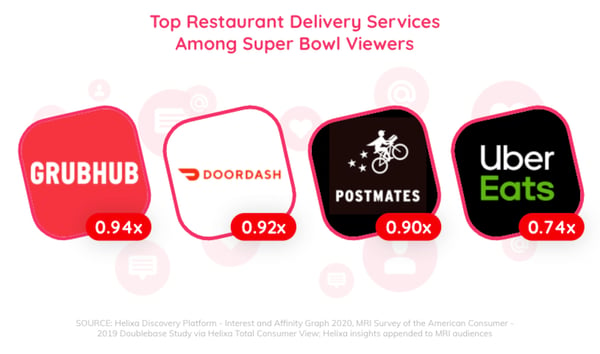 Then there’s Drizly, which took many cities by storm during quarantine — sales are up 485%. The company even managed to ride that wave and get acquired by Uber. 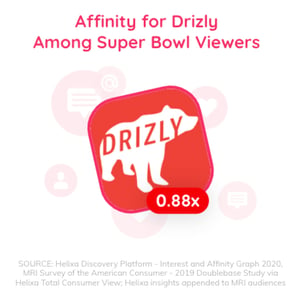 You probably noticed that these are all under-indexing, meaning that this crowd isn’t engaging with these delivery services as much as the average American. Compared to the delivery services, The Big Game’s viewership is more concentrated in rural counties, where the delivery infrastructure isn’t always on par with what is available in big cities. That might be one reason for the lack of engagement from this audience.

But, just like Bud Light turned 2020’s lemons into seltzer lemonade, there are a few reasons we think this weekend was a big opportunity for these apps:

Still, it’s helpful to note that the appetite for delivery may vary on the national level.

With this knowledge in mind, we drilled down to the state level to figure out where we could find the top fans for each delivery brand.

Regional trends in food delivery among The Big Game’s viewers 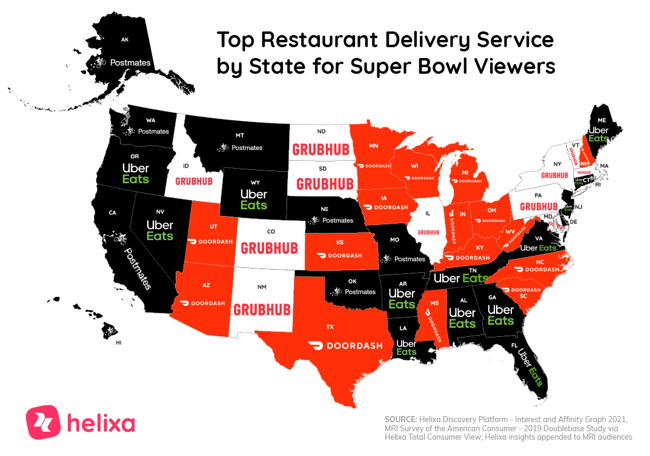 When you break out the numbers by state, we see some strong regional trends. The South, for example, is dominated by DoorDash and UberEats.

DoorDash also has a great foothold in the Great Lakes region — except Illinois, which went to GrubHub. The app’s strength in Chicago could have made the difference: The affinity for GrubHub is 3.69x in Chicago’s metro area, almost triple that of DoorDash, at 1.26x.

In fact, Illinois holds the top affinity score for a delivery service out of all 50 states at 2.60x. GrubHub had its regional win in the NorthEast, while Uber Eats and Postmates split the West Coast.

Ultimately, DoorDash took the most states, including Texas and some other major wins.

And, of course, all of those salty delivery options are going to have the fans at home feeling thirsty, so we looked at Drizly’s numbers next.

Depending on the state, that opportunity fluctuates quite a bit. Here’s a list of all the states Drizly operates in, ranked by the affinity for Drizly among fans of The Big Game. 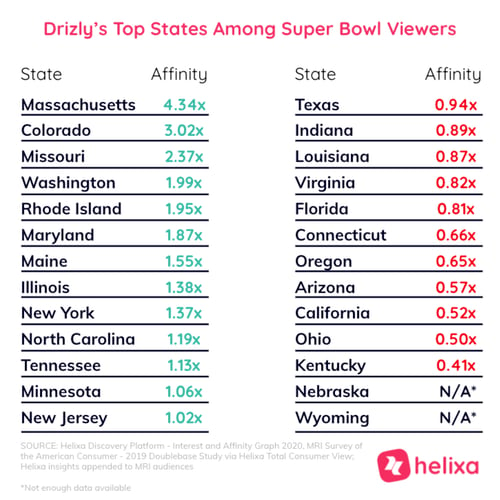 Unlike the restaurant delivery category, there is more variation within each region.

Another way we looked at this data is to compare data between restaurant and alcohol delivery in each state, and some interesting insights emerged.

Drizly is winning in three states where restaurant delivery services are seeing below-average engagement among fans of The Big Game: Missouri, Minnesota, and Maine. Maine presents the most drastic contrast: Its top delivery app, Uber Eats, garners an affinity score of 0.33x while Drizly’s is 1.55x.

The top teams for food and beverage delivery

Because we’re looking at a major sports league, we can have some fun and segment the NFL audience by the teams they engage with.

Many teams have statewide or even national followings, so it’s not enough to just look at the metro area each team is located in. Plus, this segmentation provides an opportunity to look at potential sponsorships and partnerships for each franchise.

Here’s the breakdown of top restaurant delivery service for fans of each team (regardless of whether they watch The Big Game). 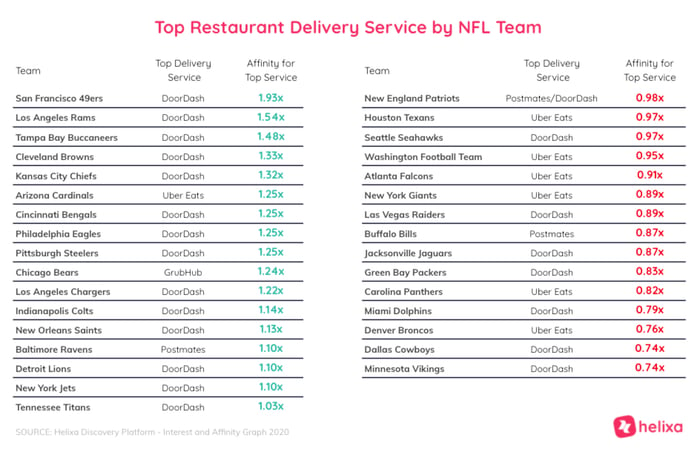 DoorDash is more dominant when we look at these more national audiences. It’s a good thing they are advertising during The Big Game this year, for the first time.

We also took a look at Drizly’s numbers for each team. 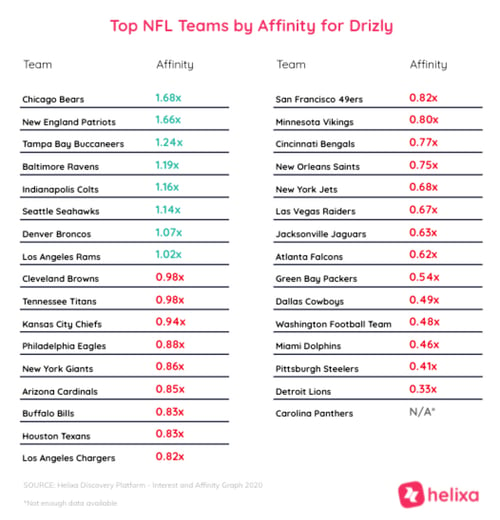 Only a quarter of NFL teams had a positive affinity for Drizly, which may be due to their limited national footprint.

When you look at the eight teams with above-average Drizly engagement, the opportunity becomes more clear: Drizly is outperforming the top restaurant delivery app in six of them, including some teams in which no food delivery app over-indexes.

This opportunity shows Drizly has the potential to further capture the hearts and wallets of football fans going forward. We’re looking forward to seeing what these numbers look like post-acquisition, as they begin to tap into Uber’s national delivery infrastructure.

Was The Big Game a big night for delivery apps?

The Big Game has always been a major event for food and beverage companies, so it will be interesting to see if that trend held, as more data becomes available.

With engagement up during COVID-19 for delivery apps, most viewers did not have to leave their comfort zone this weekend to submit their orders. And I’m sure some people opened one of these apps for the first time and liked what they saw.

If these companies can keep making smart, data-backed decisions to capitalize on their recent gains, these apps are likely to establish themselves as a more permanent fixture in the at-home sports experience.