Build a Village to Help Raise Your Recording Artist

Build a Village to Help Raise Your Recording Artist

At the top of the charts, artists get extensive teams with massive budgets, endless radio play, and legions of dedicated fans to sing their praises online and out in the real world.

For the rest, it takes more creativity and grit to build a following and the career that comes after.

One way to develop a dedicated fanbase is through collaborations that expose your work to potential fans in other artists’ audiences. Charli XCX, a larger-than-life pop star who has found her success just below the mainstream, is the perfect case study in this type of audience development.

Her discography is littered with collaborations with many different artists. Many of them are now part of a music scene that includes many LGBTQ+ fans, with Charli and her passionate fanbase, the Angels, near the nucleus.

I’m going to take a look at the success of those partnerships and the ways you can bring this strategy to your artist. As Charli would say, let’s ride.

Charli’s Angels are in heaven with these collaborations

Because Charli has so many collaborations in the bank already, we can start by taking a look at how successful they’ve been in terms of cross-promotion — a key motivator from a label perspective.

We’ll start by seeing how Charli’s fanbases over-index for each artist, demonstrating a level of interest above the U.S. average.

Luckily for Charli, her fanbase engages with every single one. For three-quarters of these artists, the affinity score is in the double digits, meaning Charli’s Angels are at least 10 times more likely to engage with these artists than the average U.S. adult.

In some of these cases, the artists are in the same alternative pop scene and “function as gay icons,” like Charli, which can contribute to a higher affinity between audiences. But in other cases, like with Haim (18.76x) and Clairo (16.54x) in the indie space and Yaeji (34.45x) in the electronic space, the overlap in fans is likely more attributable to their past collaborations with Charli.

So now we know that Charli’s fanbase has a high affinity for her past collaborators, but is the opposite true? We flipped the perspective to see what percentage of each artist’s audience is engaging with Charli, through our penetration measure. 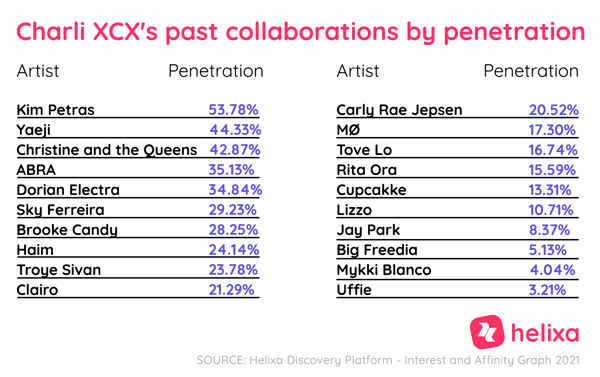 Again, we see double-digit numbers for about three-quarters of these collaborators, and at the top, a full half of Kim Petras’s audience engages with Charli, following multiple collaborations across different projects.

It’s safe to say that Charli has rarely missed the mark when it comes to choosing collaborators. But how is she approaching this successful process? We can get some hints from past interviews and better understand what her audience is looking for through Helixa.

Tuning into her process and audience

Charli is notorious for working with people she’s already a fan of.

But that doesn’t mean she’s not open to new discoveries from her team. She’s even discovered collaborators through her fans, including rapper CupcakKe and producer Dylan Brady.

Charli is very plugged into her own tastes, but she always has her audience in mind. She may not be using a tool like Helixa, but she stays tuned in to what her Angels are listening to and looking for.

Luckily, we do have Helixa and can use the tool to break down some lifestyles and opinions from her Angels. This will help us get to near that level of knowledge, even without the prior experience and personal interactions.

Like Charli herself and her fellow collaborators, they like taking risks (1.62x for “agree a lot”) and standing out in a crowd (1.65x for “agree a lot”). They are also music lovers (1.88x) who are online for fun (2.77x) so it’s probably a safe bet that these fans are spending time online looking for new music and nerding out over their favorite artists.

These attributes explain why they like Charli, but it also provides hints for what kinds of artists they might be looking for when it comes time for a collaboration.

Basically, a prime candidate is someone a little left-of-center who has a unique sound and isn’t afraid to experiment.

To see who might fit the bill, we built an audience that engages with Charli and fits the psychographic profile we developed above.

Adding these lifestyles will help us get at Charli’s core audience and uncover artists that align with what she’s looking for in a collaborator.

When this core audience’s top influencers in the “singers & bands” category are ranked by taking both affinity and their reach into consideration (and removing previous collaborators), we get some really compelling options. 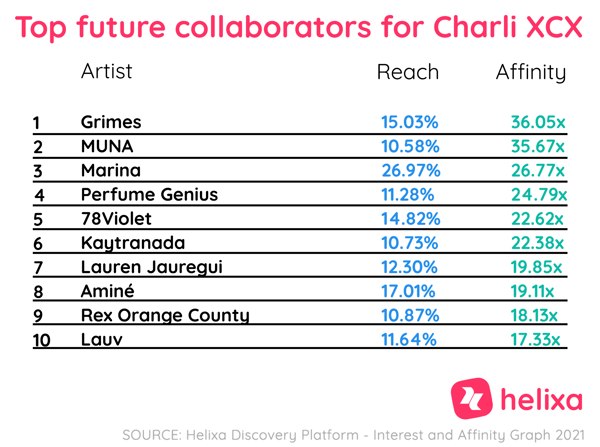 Some of these artists operate in a similar space to Charli, including Grimes, Marina, and Lauv. They are probably on her radar already, but they are strong options and natural fits.

The more interesting options on this list are the ones that aren’t immediately obvious. For example, I’m surprised at how much overlap Charli’s audience has with Rex Orange County and Kaytranada. The former deals in softer sounds in indie pop and alternative r&b while the latter mixes r&b with house influences.

Another interesting example is Perfume Genius in the fourth slot. He makes orchestral art-pop that veers toward indie rock on his latest album. Fans may be interested in both artists’ dedication to experimentation and finding new sounds, but, regardless, this could be a very interesting matchup with the potential to bring a lot of new fans into the fold.

Obviously, given Charli’s strict parameters for collaboration, each artist’s body of work will have to pass her sniff test, but we have some strong data-backed options to bring to the table..

“You’ve got the key, can you unlock it?” –Charli XCX

Now we have an understanding of how Charli’s collaborations have gone so far, and a strong list of contenders for future matchups.

It helps that Charli is at the forefront of the underground pop scene she occupies and plugged into new talent, but it’s definitely something to consider for any artist that has a dedicated cult following they are looking to grow.

When combined with an integrated artist marketing strategy backed by data from a platform like Helixa, the chances of success increase dramatically.

To learn how you can apply Helixa’s insights to your talent-related challenges, reach out to schedule a call.