Surfing, mountain climbing, skiing, kayaking in the wilderness - the Patagonia brand lives and breaths passion for the outdoors. Not surprisingly, so do its customers. Patagonia isn't one of those brands that pays lip-service to the outdoors while actually selling to plaid-clad hipsters. Their customers really are the people who are scaling scaling mountain sides or tearing down slopes at 100 miles per hour.

This is a company that doesn't sell undergarments - it sells baselayers. It doesn't sell swimsuits, it sells wetsuits. To Patagonia’s customers, clothes aren't fashion statements, they're equipment.

This is also a company that historically claims "advertising is our dead last priority." So how does Patagonia sustain its reputation and what else can we learn about their most ardent enthusiasts?

Rose Marcario, CEO of Patagonia recently told Fast Company “If the people working for me believe that we do things to make the world better, to make businesses take on a greater responsibility not only to bottom-line profits but also to people and the planet, then that would be the best legacy.”

For a company that preaches commitment to sustainability over short term profits, Patagonia knows how to put its money where its mouth is. Marketing VP Cory Bayers told Fast Company “when employees proposed that the company give away all of its 2016 Black Friday sales to grassroots environmental organizations, Marcario green-lighted the plan within 30 minutes via text message. (The company raised $10 million and signed up 24,000 new customers that day.)”

It is increasingly evident that despite minimal traditional advertising, word continues to spread fast about Patagonia’s strong mission and it’s customer and fan base continues to increase in size and loyalty. Patagonia is confident enough in their customers’ loyalty to even encourage them to pass down their old Patagonia gear instead of throwing it away and buying something new to replace it, counting on them buying more gear only when they really need it, as demonstrated in their recent ad below.

But what else can we learn about Patagonia’s fans besides their support of it’s corporate values?

Uncovering the Demographics and Interests of Patagonia Fans

First, let's look at who Patagonia's audience is and what else they are interested in. The biggest segment of Patagonia’s fans has shifted in recent years from younger married men 25-34 to older married men 55-69. This group is also over 20% more likely than the average U.S. adult to make an income over $100K.

Geographically, Patagonia’s audience is more likely to be found in cities that are closer to major mountain ranges or oceanic landscapes like Boulder, Honolulu and Burlington, VT, with San Francisco, Denver and Seattle being the major urban markets with the highest concentration of Patagonia lovers.

Patagonia’s audience’s interests are focused on outdoor athletic gear and activities as well as organizations that support wildlife and the environment. This backs up the assumption that Patagonia fans share the company’s values. Some more recognizable brands and organizations that have high affinity among Patagonia fans include Columbia, North Face, National Park Foundation, Sierra Club, GoPro and Tesla.

Observed consumer interests are expressed as the Affinity Index, which measures how the target audience you are analyzing is different from the average American adult.

Looking at media interests, a similar theme emerges. Publications that focus on outdoor sports or business innovation and social responsibility like Outside Magazine, Runner’s World and Fast Company all find themselves within the top 10 media interests. 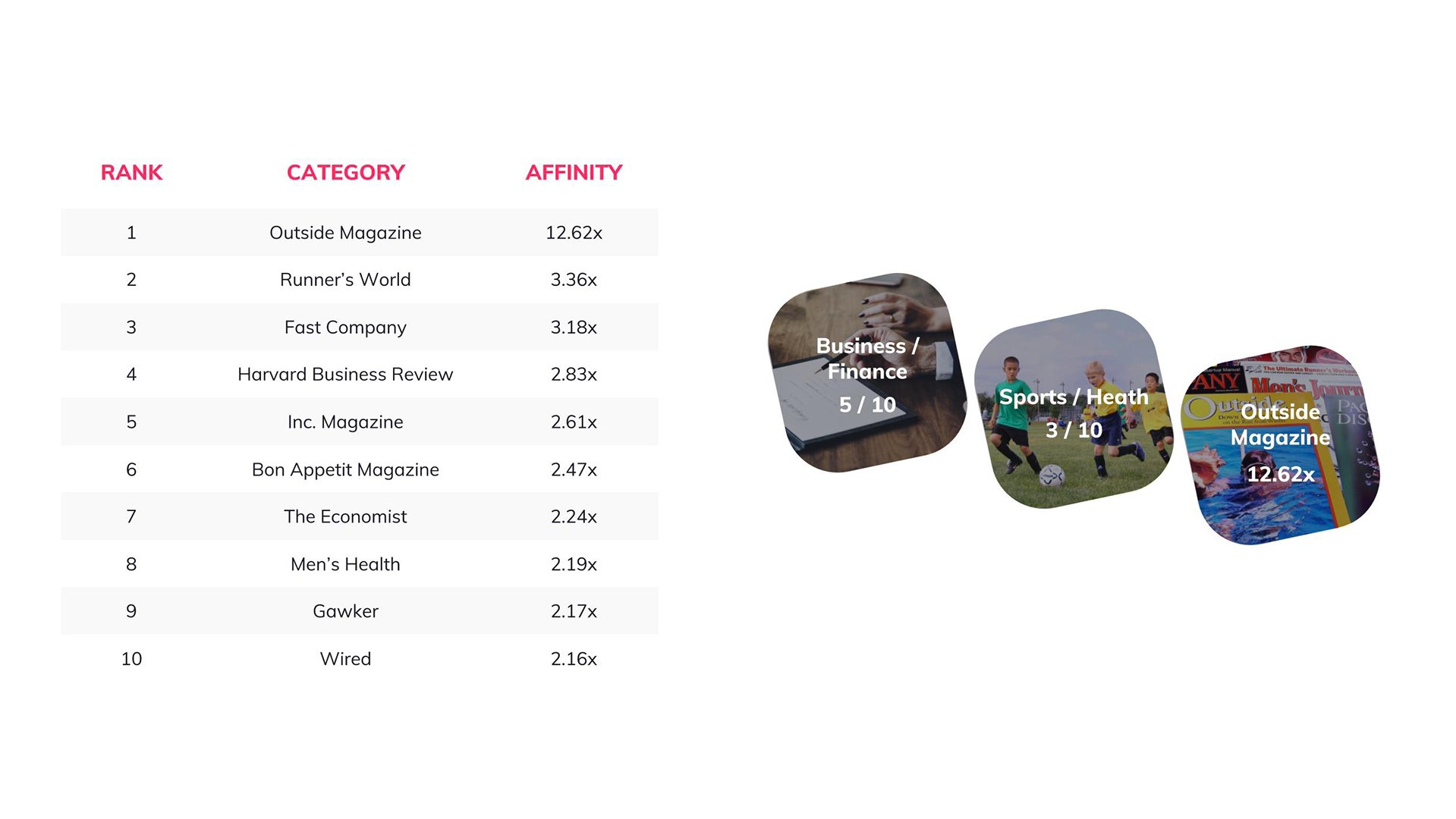 For even more insight, download the infographic below which shows some more detail on the audience of Patagonia and how Helixa’s Affinity Index can help uncover what they are most passionate about across different kinds of interest categories.