Bachelor Nation, Will You Accept This Host? 🌹

Bachelor Nation, Will You Accept This Host? 🌹

On August 9th, millions of Americans (including me and my Bachelor nation group chat) tuned in to see Bachelorette Katie Thurston get engaged to the man of her dreams. One thing that was unique to Katie’s season was that she was the first Bachelorette to not have the support system of Chris Harrison (Bachelor Nation host from 2002 - 2021).

Chris Harrison formally stepped down as the host of The Bachelor, Bachelorette, and Bachelor in Paradise in the beginning of June, leaving a space for a new host — better yet, two new hosts.

So, despite Harrison’s departure, Katie Thurston was not left alone, she was given the support system of two interim hosts and Bachelor Nation veterans: Tayshia Adams (Bachelor S23, Bachelor in Paradise S6 and Bachelorette S18) and Kaitlyn Bristowe (Bachelorette S11).

Tayshia and Kaitlyn will both be returning as hosts for Bachelorette S19 with Michelle Young, but is there a better option?

Let’s explore some potential hosts, based on Bachelor Nation’s interest — as determined by the top influencers for each show’s audience. Join me on my journey, to find out who gets the final rose.

Getting Familiar with The Bachelor’s Audience

To start, I wanted to see who The Bachelor audience cares about. When we look at top influencers of that audience in Helixa, it is no surprise that Bachelor Nation dominates the top 10 spots.

First, I used affinity to rank the influencers, and Ali Fedotowsky (Bachelor S14 and Bachelorette S6) had the highest affinity - 24.82x followed by Tia Booth (Bachelor S22 and Bachelor in Paradise S5 and S7 — sorry for any spoilers).

What is most interesting about the ranking on affinity, our leading indicator of what is distinctive and unique about any target audience, is that the audience is still interested in Bach Nation favorites from a few years ago. Fan favorites like Ali, Desiree, Emily, Melissa, Sean and Shawn, haven’t been on our screens in years, and yet, Bachelor Nation still has a soft spot for them.

Ali definitely gets my first impression rose, but will she make it to the end? 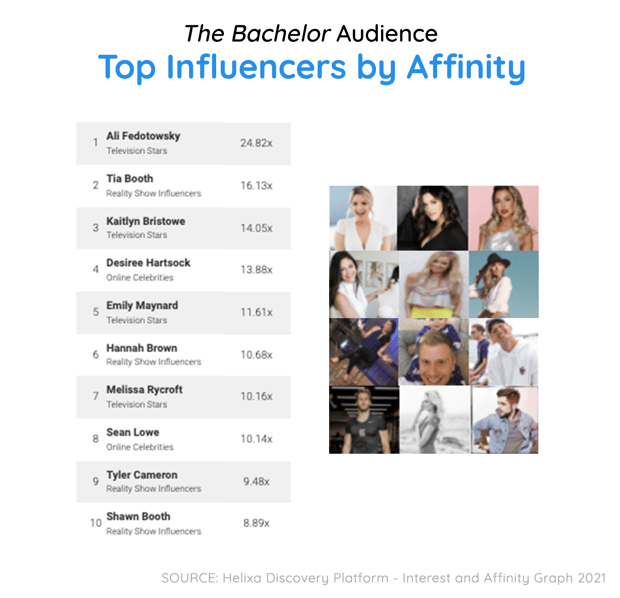 When I sorted The Bachelor’s top influencers by reach, it told a very different story. The ranking was quick to show celebrities The Bachelor's audience cared to engage with.

Side note: Reach calculates the percentage of consumers within your target audience who share the specific trait or interest while the affinity index calculates how different the target audience you are analyzing is from the average American adult population using an index.

For this analysis I felt it was important to focus on both metrics - you need the audience to be interested in this person more than the average American adult but you also need to make sure that the audience is sizable. 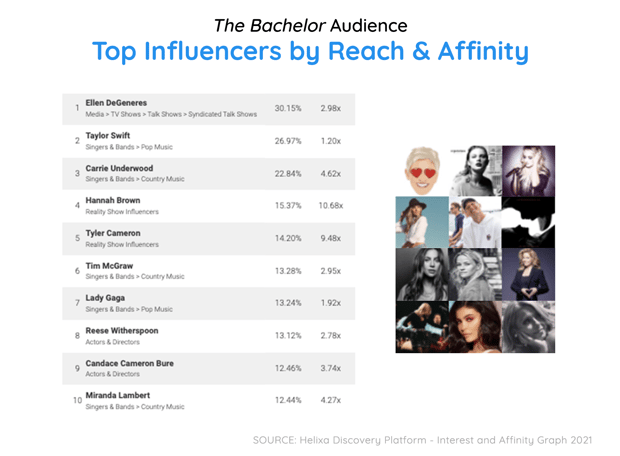 Ellen Degeneres comes up with the highest reach out of all influencers with 30 percent of The Bachelor’s audience engaging with Ellen. Taylor Swift, Carrie Underwood, Tim McGraw, Lady Gaga and Miranda Lambert are all musicians that The Bachelor audience also cares about. I think all of those would be better guests on the show than the host.

When looking at only Bachelor Nation personalities - Hannah Brown (Bachelor S23 and Bachelorette S15) and Tyler Cameron (Bachelorette S15) come to the top of the list. Both also have high affinity scores of 10.68x and 9.48x respectively. 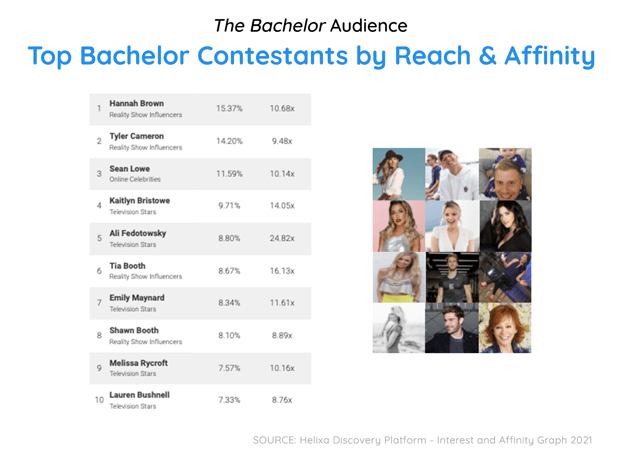 When looking at this ranking, there is only one conclusion that comes to mind, Hannah Brown for The Bachelor host! Hannah Brown can activate her “beast mode” and help find the next Bachelor a partner for life. 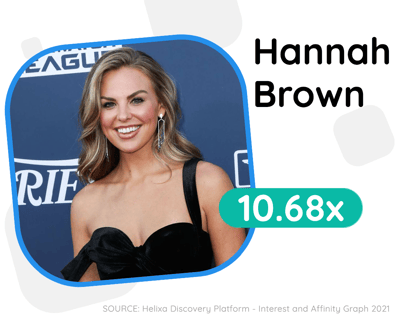 Even though she wasn’t successful in her own Bach journey, I think she could be a good support system for the lead. The Bachelor’s audience seems to agree with me — they are 10.68x more likely to be interested in Hannah Brown than the average U.S. adult, also over 15% of The Bachelor audience cares to engage with her. It’s a no-brainer.

She is smart, compassionate, likes to be on screen, and takes no nonsense (see you later Luke P).

Your Next Bachelorette (Host) is…

Time to move onto the show's first spinoff…. The Bachelorette.

I started my research the same: by looking into the show’s affinity with influencers. As luck would have it, one of my favorites popped to the top, Jason Tartick (Bachelorette S14). I think Jason is a no-brainer for host. He is heartwarming, charismatic, funny, and better yet met his future wife through Bachelor Nation. 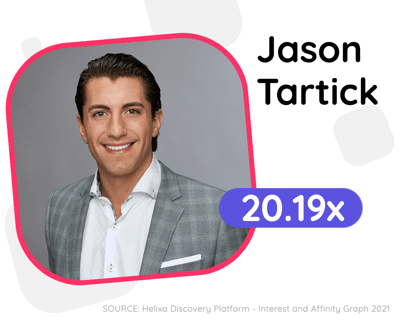 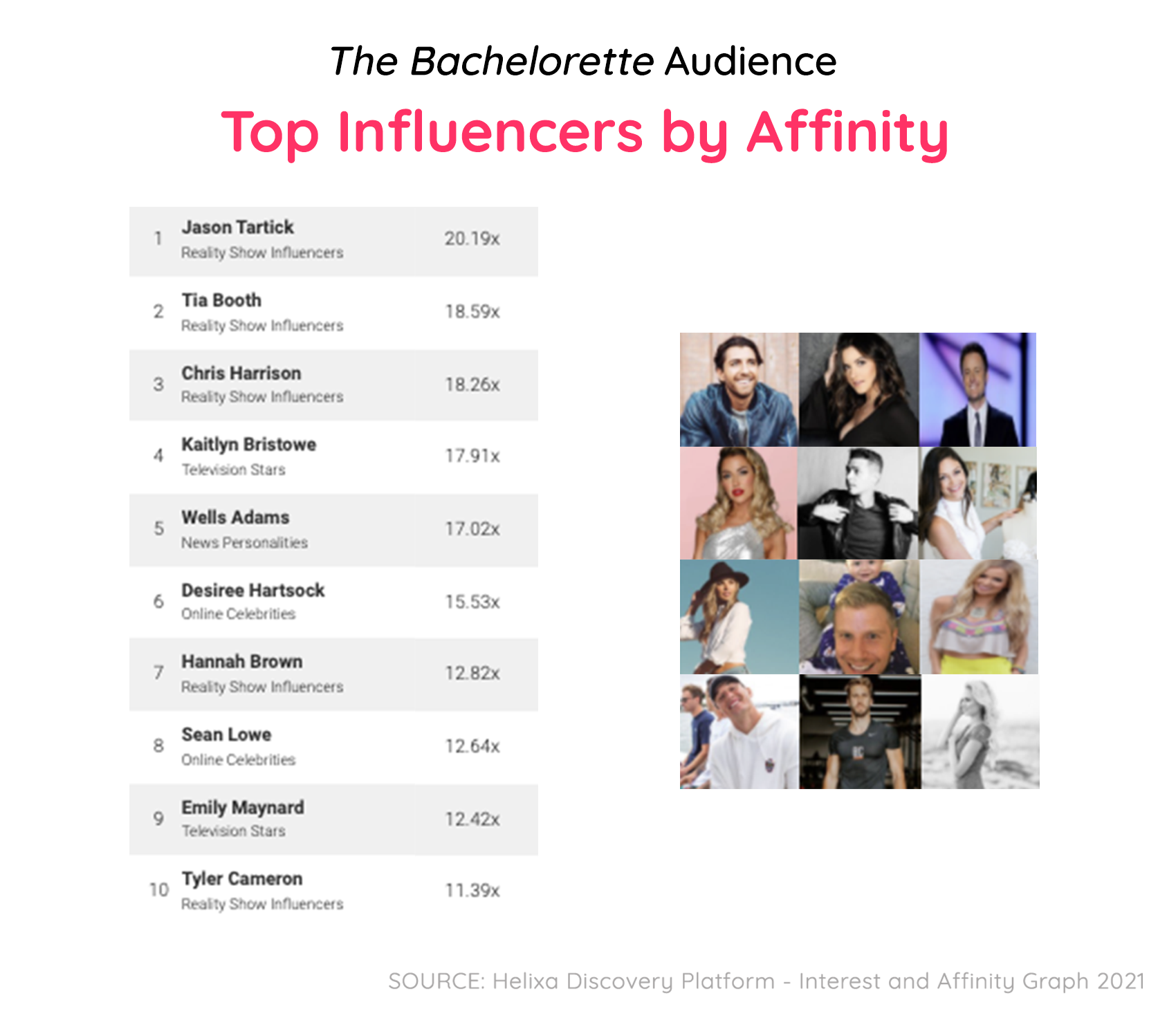 The Bachelorette audience agrees: They are 20.19x more interested in Jason Tartick than the average American adult. Not only that, but 10% of The Bachelorette’s audience engages and follows him as well.

Once his name came up I knew I didn’t have to look any further. However, if he stipulated that his fiance, Kaitlyn Bristowe, had to do it with him, I think that would be just fine: 13 percent of The Bachelorette audience is interested in Kaitlyn and she garners a high affinity of 17.91x. 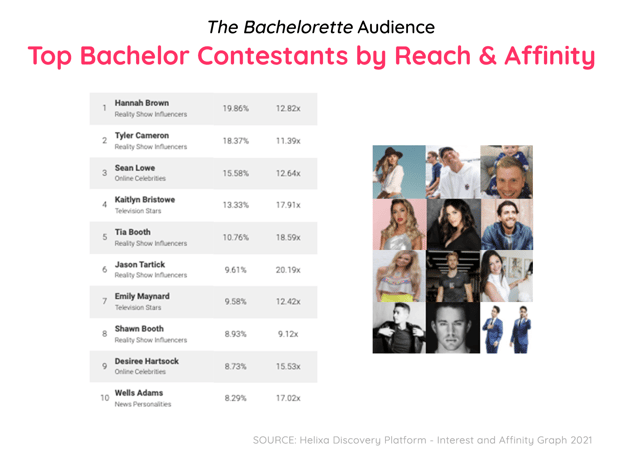 They could be the new power couple of Bach Nation. Kaitlyn can easily relate to the lead as she had that tough position while Jason can listen to the potential suitors of The Bachelorette.

The most dramatic/shocking host reveal yet….

Tia Booth had the highest affinity with this audience — they are 40.54x more interested in Tia Booth than the average U.S. adult. That’s a lot! It’s no surprise, given that she has been to paradise once and is seen in the trailer of this upcoming season (we’re all hoping she has better luck this time around). 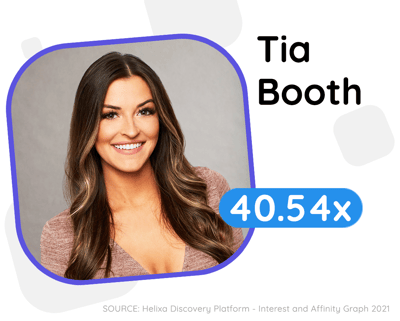 When I sorted by reach, Hannah Brown came to the top again. Hannah was the last bachelorette to send contestants to paradise: seven from her season went. So, we expect to see her popping to the top. I already had Hannah chosen to be the new host of The Bachelor so she won’t be getting my rose for this round.

But, I am not (only) basing this all on my love for Tia, but rather that 25.37 percent of the Bachelor in Paradise audience has an interest in her. 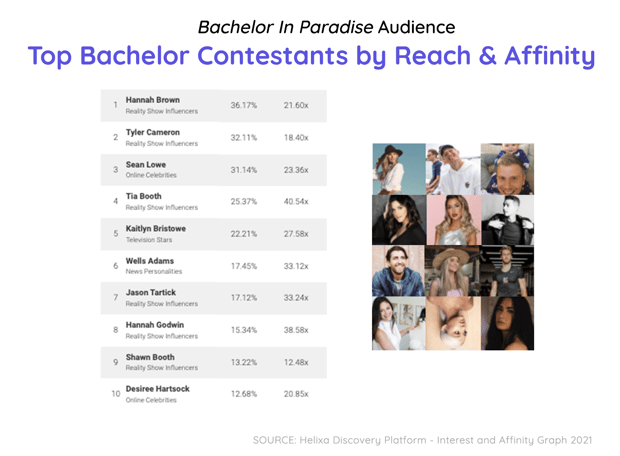 There is one caveat to having Tia host that I have to add… everyone’s second favorite bartender (naturally behind Jorge Moreno) must be part of it: Wells Adams (

The Bachelor in Paradise audience is 33.12x more interested in Wells Adams than the average American adult, and 17.45 percent of the audience is engaging.

I am disappointed it isn’t more, but what do I know? (Editor’s note: clearly, she knows a lot).

And the overall final rose goes to… 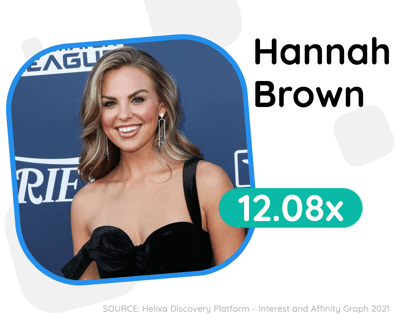 If we are looking for one host for all three shows, Hannah Brown is the obvious choice. When we combine all three audiences, we see that the overall Bachelor Nation is 12.08x more interested in her than the average American adult and 17 percent of the audience engages with her.

Kaitlyn Bristowe also comes in high in both of those data points with an affinity index of 14.98x and a reach of 10.23 percent.

But let’s explore more about why Hannah Brown is getting my final rose and I am sending Kaitlyn Bristowe packing (don’t worry, I would stop her before she got down on one knee):


In reality, any of the people I have mentioned above would be fantastic hosts for this show. Tayshia, Kaitlyn, Hannah, Tia and Jason all get my other roses. 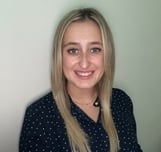 Kaitlyn Harrison is the Director of Customer Success where she helps clients discover new and interesting ways to develop insights within the platform. She is a Bachelor Nation super fan, joining group chats every week and famously losing her Bachelorette bracket to her mom.