With the LIV Golf tour gaining popularity, does the WM audience represent a way for the PGA Tour to stay relevant? Or is this audience more aligned with the prim and proper aesthetic of the Masters?

A Drive Right Into The Bunker

The Masters Tournament is one of the most significant events on the golf calendar and is the pinnacle of country club appearance and attitude, so it’s no surprise that 65% of the WM audience engages with this event. What is surprising, I would even say very surprising, is that The Masters' audience is more likely to be Party Goers than the WM audience. In fact, when we remove anyone who engages with The Masters from WM’s audience, their affinity for being Party Goers drops to 0.77x (Affinity is the leading indicator of what is distinctive and unique for your target audience). Is the hypothesis that the WM Phoenix Open is attracting a completely different audience already a bogey? 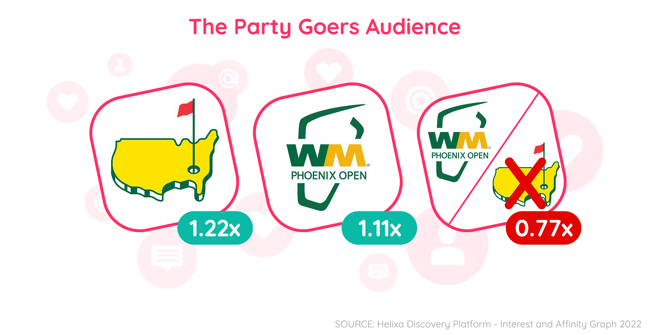 As indicated by the 16th hole at TPC Scottsdale, the WM audience likes beer, more than The Masters' audience. We used Helixa’s Total Consumer View (our data fusion product in partnership with MRI-Simmons) and found that the WM audience is almost twice as likely to go to a bar only once a month, so you’re not going to see them out every weekend. So, given the overall Golf fan’s affinity for a good time, it seems that the WM Phoenix Open attendees are the same crowd we always see at other golf tournaments, they’re just finally able to let loose. 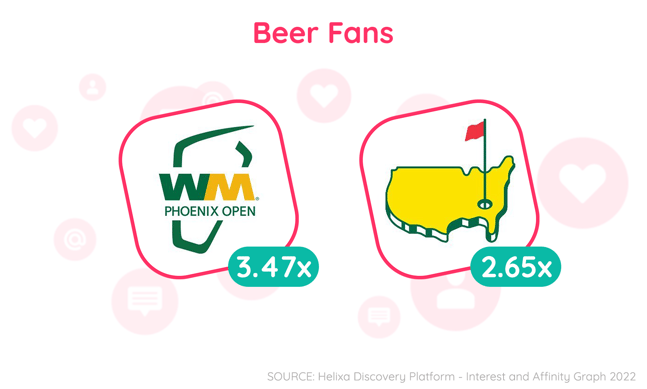 Golf has always been regarded as a very formal and dignified sport. But to our surprise (again), the country club atmosphere and attitude that most tournaments exhibit on the PGA Tour may not be what our Golf audience wants in a golfing event. According to our platform, this audience enjoys partying, and they are also likely to be Gamblers and Motor Lovers. 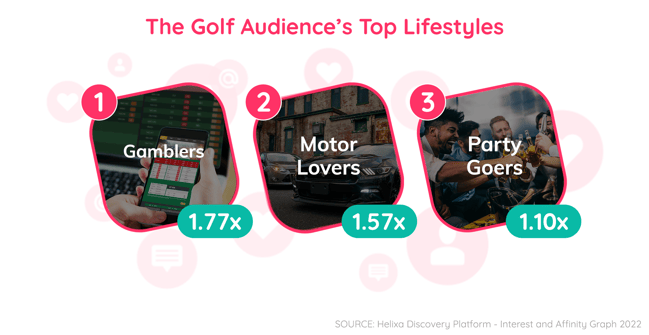 While not as popular as it is amongst the WM or Masters audience, the overall Golf audience is still twice as likely to engage with beer brands, with an even higher affinity of 2.29x towards Non-Craft beer brands. Looking even deeper into the Golf audience, they have high affinities towards Fast Casual and Fine Dining restaurants.

The sport of Golf and its audience has shifted; Golf fans have interests outside the country club atmosphere and attitudes that people associate with them. By identifying these specific audience insights, the PGA tour can take these interests into account and potentially incorporate them into future tournaments.

Chipping in for Birdie

By taking a closer look at this audience, I discovered that the WM audience likes to have a good time, especially where beer is involved. But not more so than overall Golf fans, now that they are finally being given an opportunity to let ‘er rip at a tournament. This is not what I expected when I first started to look into the WM audience; I was expecting to see a fanbase much more likely to enjoy a party than the average Golf fan.

No matter how obvious something may seem, it’s always important to take a deeper look beyond surface-level data or assumptions, as the results could shock you, teach you something new, and hopefully open up a new growth opportunity for your business. Who knows, maybe the PGA tour will have more beer sponsorships in the future…

At Helixa, we use audience intelligence to help our clients identify new opportunities and pathways to growth. If you’re looking to learn more about your target audiences, look no further -- Schedule 15 minutes with us.