Dr. Dre. Snoop Dogg. Kendrick Lamar. All Los Angeles hip-hop royalty. A brand-new football stadium in Los Angeles is allowing the city to host its first Super Bowl since 1993. Two teams moved to Los Angeles in 2016, allowing one of them to be in this weekend’s Super Bowl. A Super Bowl in LA with a LA team on the field featuring a halftime show starring LA hip-hop royalty. It sounds perfect, but there is a catch for the LA audience: their favorite team isn’t playing.

While the main focus of the halftime show may be the LA artists, the additions of Eminem and Mary J. Blige help bring a little something for everyone. The four male artists have an audience between 61% to 78% male; Mary J. Blige’s audience flips that to 71% female.

And while, as expected, the three LA artists are more likely to bring in a west coast audience, Eminem sees most of his following come from Midwest, and Bilge’s audience is primarily located in the South. 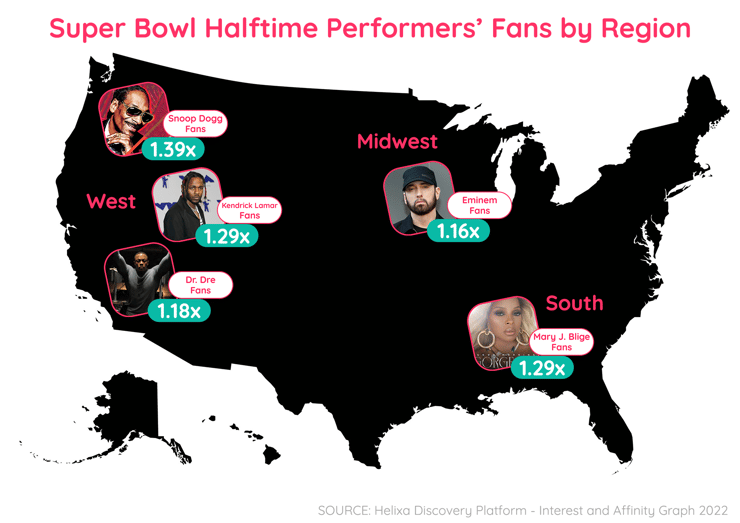 The performers’ fans even cover all ages from 18 to 54. Unsurprisingly, the only artist to debut in the 21st century, Kendrick Lamar, has the youngest audience, but the other three male artists bring in the 18-24 audience as well. Dr. Dre and Snoop Dogg have fans equally spread between the 18-24, 25-34, and 35-44 audience. Blige once again flips this around as most of her audience is between 35 to 54.

How fans of the halftime artists feel about football

If the NFL sought to hire halftime performers who would delight football fans, the league succeeded with 62% of all the artists’ fans engaging with football teams and players.

Fans of the five artists are 1.23x to 2.49x likelier than the average person to be sports enthusiasts (among the rappers, that figure is at least 2x).

As for the teams in the big game itself, surprisingly, neither are among any of the performer’s fan’s favorite teams. While the Rams are more popular than the Bengals among these audiences, it’s a team that used to call LA home that continues to capture hearts. The Raiders are still number one for Dr. Dre, Snoop Dogg, and Kendrick Lamar fans. Maybe the Bengals knocking the Raiders out of the playoffs will give the Rams a boost from these fans anyways. 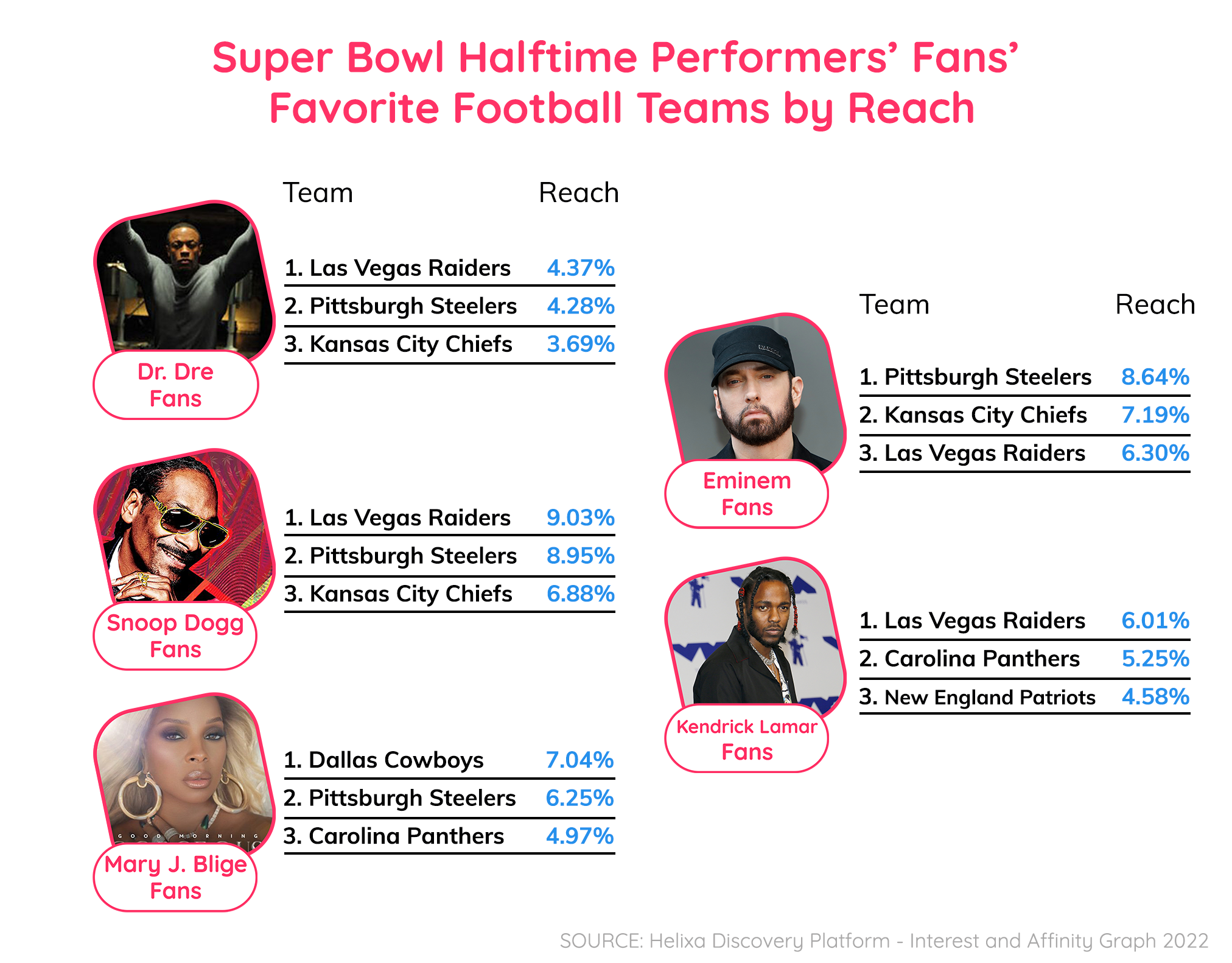 The Las Vegas Raiders have the highest reach among Dr. Dre, Snoop Dogg, and Kendrick Lamar fans. They rank three for Eminem fans. The Mary J. Blige crowd is partial to the Dallas Cowboys.

LA rap fans’ affinity for the Raiders likely stems from West Coast rap’s association with that team in the 1980s and 1990s. In particular, Dr. Dre’s group N.W.A adopted the Raiders’ tough aesthetic. So, it’s no surprise that Dr. Dre’s fans still love the Raiders and that affinity has carried over to rappers associated with him. 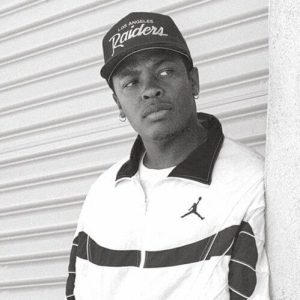 Tools like Helixa can help brands and agencies uncover unexpected insights about narrow audiences, such as the fans of Dr. Dre, opening up messaging opportunities that help them stand out in a saturated media environment.