A New Challenger Aims to Put WWE on the Ropes

A New Challenger Aims to Put WWE on the Ropes

I was too young to fully experience the Monday Night Wars between the then-WWF (now WWE) and WCW in the 90s. I never had the chance to appreciate the intrigue of seeing the big names in talent switch companies and figured it would stay that way...

That all changed when All Elite Wrestling was founded in 2019 and announced long-time WWE star Chris Jericho was joining their initial roster. And they continued to pile on the big names with the additions of Jon Moxley (formerly Dean Ambrose in WWE), CM Punk, Bryan Danielson (Daniel Bryan), and Adam Cole, among others.

If you don’t follow the world of entertainment wrestling these names don’t mean much but any avid fan would know that these moves have thrown down the gauntlet. Let’s look at how AEW can maximize its investment and give WWE a true run for its money.

(Editor’s note: To avoid confusion, we refer to the athletes as wrestlers throughout, instead of WWE’s preferred distinction of “sports entertainers.”)

The crowd is roaring for these WWE transfers

Looking at the AEW audience, their favorite wrestlers are clear.

Brandi and Cody Rhodes are the two AEW wrestlers, and former WWE independent contractors, with the highest reach. But, since they are also AEW executives, I think it’s not fair to include them.

Other headliners who have transferred over and been at AEW for a while now have had time to build an audience — CM Punk has the highest at 15 percent, followed by Bryan Danielson at 13 percent. While Adam Cole has the lowest reach among AEW’s audience compared to Punk and Danielson (10 percent), he may have the most potential for growth.

Top WWE Transfer in the AEW 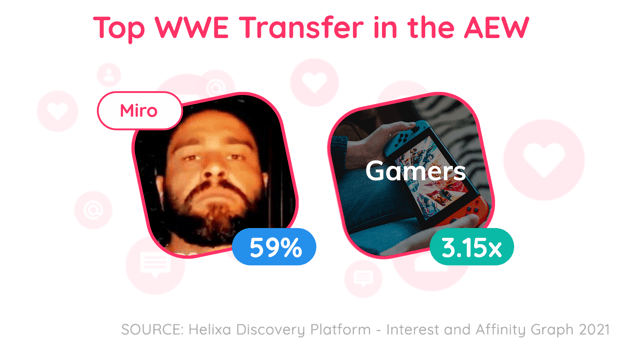 I’ll admit, I was initially surprised at Miro’s position at the top of the list for AEW’s audience. But when digging a little deeper into his audience we found they over-index as gamers at 3.15x.

This paints a much clearer picture as Miro was introduced to the AEW audience as a gamer, and he also has over 80,000 subscribers on Twitch. He clocks in at a reach of 59 percent, more than 20 points ahead of fellow WWE transfers, Matt Hardy (33 percent) and Chris Jericho (32 percent).

We already see that AEW’s audience has an affinity towards gaming and that Miro with his 80,000 Twitch followers is also popular with AEW fans. Adam Cole has nearly 100,000 followers on Twitch so we could see that crossover helping him become one of the most popular wrestlers in AEW.

To engage these fans, he could bring AEW World Champion and passionate gamer Kenny Omega onto his Twitch streams, tapping into Omega’s 67 percent reach with this audience.

Gaming could power this AEW link-up 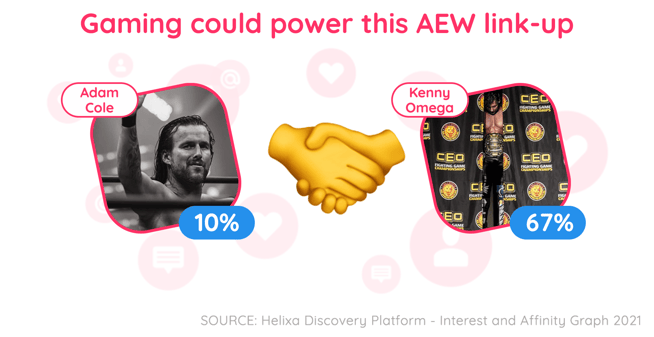 Now we know which former WWE wrestlers are popular in AEW, and the audience development opportunities they bring to the table. But to keep building momentum, we need to figure out who’s next.

Building out a mean roster

Each of those moves helped grow AEW’s audience, but there is still plenty of ground to cover in taking down WWE’s sizable monopoly.

Which begs the question: Of those remaining at WWE, who would make the biggest impact by switching sides?

There were many early critiques toward AEW’s failure to prioritize its women’s division, and a look at the data explains why. The most popular WWE wrestlers among AEW’s fanbase are women: Sasha Banks (63 percent), Charlotte Flair (62 percent), and Becky Lynch (52 percent). And it’s not close, the next highest reach belongs to Jinder Mahal at 10.96 percent.

Female wrestlers could be key to AEW's future 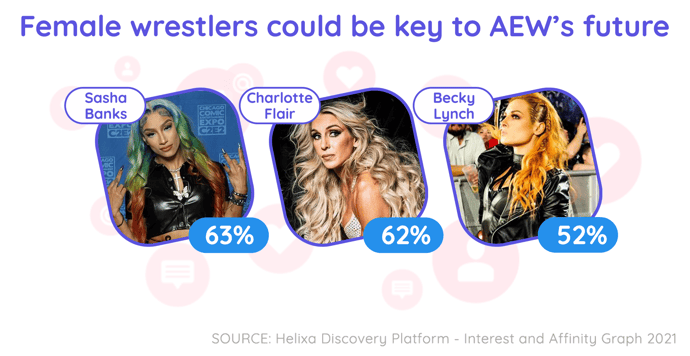 I did not expect such a wide gap between three of the ‘Four Horsewomen’ and the rest of the WWE. As a long-time fan, I would’ve guessed AEW fans might be dreaming about reuniting Jon Moxley with his former partners Seth Rollins and Roman Reigns, but they clock in at 1 and 2 percent reach, respectively.

This just goes to show that even the predictions and choices of long-time fans don’t always jive with the reality of hard data. That’s why it’s important to always use an audience intelligence tool like Helixa to take out the guesswork.

Everyone loves a little friendly competition

In the end, the data shows the impact of former WWE wrestlers on the growing AEW audience. After all, competition is the best thing for everyone, and I’m excited to see how each company levels up to provide the best fan experience possible.

But as we saw above, adding familiar faces to the roster is only part of it. Understanding what the fans truly care about is the game-changer. Whether it’s crossing over into gaming to capture the attention of new fans or focusing on building out their women’s division — a data-driven approach to audience development will give any challenger brand the edge.

I’ll leave you with a bit of personal bias in who I’d like to see switch sides: It’s definitely Kevin Owens and Sami Zayn. AEW fans have an affinity of 19.27 for Owens and 18.37x for Zayn, so maybe I’ll get my wish.