Let’s All Go To The Movies: Charting Movies Fans’ Interests Over Time

Let’s All Go To The Movies: Charting Movies Fans’ Interests Over Time

In just a few years, we’ve seen some significant changes in the movie industry. Shifts from mid-budget star-driven dramas to star-studded blockbuster franchises dominating the screens, and the rise of streaming opened up distribution channels for creators only to have COVID-19 halt new film productions.

Throw in how nuanced viewership has become with all the content options on the table, and you have a very unpredictable landscape to navigate. So how can you predict the unpredictable? The answer lies in reliable insight into audience behavior and understanding how that behavior evolves over time.

With Helixa's Time Machine, you can examine how your audiences’ Affinity for a certain topic, talent, or brand shifts over time, to find patterns that will inform your strategy — dial in on key months, quarters, and years to see Affinity at a specific point in time.

Tapping into the Movie Buff audience

To keep the analysis high-level, we took a look at our “Movie Buffs” audience. This group has high affinities for movies overall, are always watching for new releases, and are likely the people you’d go to for movie recommendations. Full disclosure: I am the Regal Unlimited, card-carrying movie buff in the Helixa office.

In 2021, Movie Buffs had a higher Affinity for horror than any other genre. They were 62% more likely to engage with titles in this genre than the general population. What’s more interesting though is the trend month-to-month. Movie Buffs had high Affinity for scary stuff all year, but the affinity was actually the lowest in October, the month of Halloween.

While it might seem odd, it actually makes sense when you consider it is in comparison to the average person who would be watching more horror movies in October. The takeaway is that Movie Buffs are down for Horror, even more so outside of Halloween. This could offer some flexibility when examining release windows: horror can find an audience all year long.

Romance was among the most unpredictable genres month-to-month, along with documentaries (but more on that later). Movie Buffs’ interest in the genre peaked in November, where they were nearly two times more likely to be engaged with the Romance genre than the average person — and it wasn’t due to one outlier hot release either. The titles with top affinities that month were mostly older films like Grease, La La Land, Cinderella, and Titanic - which all had Affinity scores of 2.3x to 3x.

There is a similar pattern throughout the year, Movie Buffs are feeling more than a little nostalgic for old romance. In both examples, we saw that seasonality isn’t always the best way to predict interest, so a more nuanced approach is key.

Use your time wisely and invest in fan favorites…

The analysis also saw Documentaries make a comeback, but as we’ve seen with the other examples, timing is everything.

Both 2009’s The Cove and 2013’s Racing Extinction rose to the top of most engaged documentaries among film fans in 2021. These films both deal with the consequences of human activity on the environment, issues that become more and more pressing every year.

This trend indicates it can be wise to time releases to follow major related events or stories. Timed interest data can also show us what topics are becoming more relevant over time and lead to better creative decision-making.

But what about a less obvious example? In November 2021, Movie Buffs were nearly four times more likely to be interested in Jodorowsky's Dune, a documentary about a failed adaptation of the novel Dune. This 2013 documentary found a new audience in 2021, potentially directly resulting from the release of the newest (and more successful) Dune film adaption. This film hit theaters in late October and starred two of the ‘it’ actors of the moment: Zendaya and Timothée Chalamet. As we mentioned earlier, star-studded franchises are dominating screens, and Dune featured many fan-favorite actors.

Just a closer look at Zendaya’s audience, for example, reveals her fans’ favorite movie genres include Drama, Action & Adventure, and Science Fiction & Fantasy Films — no wonder they went to see her in Dune! 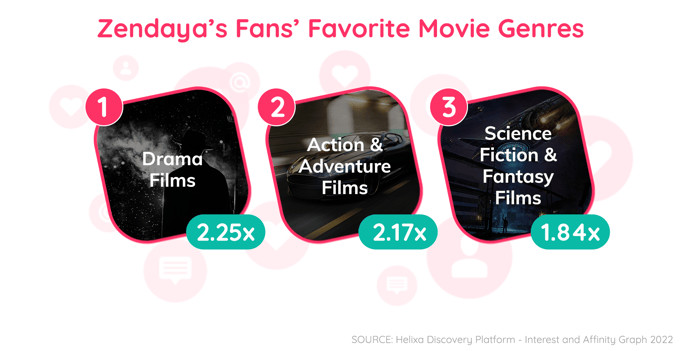 By featuring a star-studded cast, more people were more likely to watch the movie, take an interest in the franchise, and then discover the Jodorowsky’s Dune documentary. With Time Machine, we’re able to see when all of those points align and paint the full picture.

The possibilities are endless with Helixa’s Time Machine; we can assess quarter-to-quarter interest in television shows for a TV audience, understand the impact a talent choice or trailer could have on a key demographic, or even check to see if a streaming platform’s core audience has enough interest in a topic or cast to expand to related projects.

Deeper, more relevant insight means the difference between knowing I like movies and knowing I want to re-watch Belfast right after the Oscars — that nuance can translate to a lot of opportunities.

John Lopez is a Customer Success Manager at Helixa, where he helps his clients get the most out of Helixa through continued support and collaboration. John’s also big into movies, sports, and thrifting in New York City.