Watching Them Work: How the WNBA and Advertisers Can Grow Together

Watching Them Work: How the WNBA and Advertisers Can Grow Together

March Madness and Capital One ads are like peanut butter and jelly; every commercial break we see one that involves Charles Barkley, Samuel L. Jackson, and Spike Lee partaking in shenanigans. This year, basketball legend Sue Bird joined them in the fresh crop of commercials. A move that indicates that not only is the WNBA audience growing exponentially, but the league’s stars are also starting to get well-deserved partnership deals.

Bird was also featured in an ad for Corona, and Coca-Cola ran ads with Breanne Stewart and Lisa Leslie in the same campaign as Joel Embiid and “Dr. J” Julius Erving. Currently, the NBA takes the majority of these deals, but as the WNBA becomes more popular, brands should consider adopting new marketing strategies and partnering with their players and legends.

The Seattle Storm, where Sue Bird has played since 2002, has one of the largest online fanbases in WNBA, larger than some of the NBA teams. The Storm’s audience is more likely to be Sports Enthusiasts, Netizens, and Outdoor Enthusiasts — a solid persona for the Seattle metro area if I ever saw one. 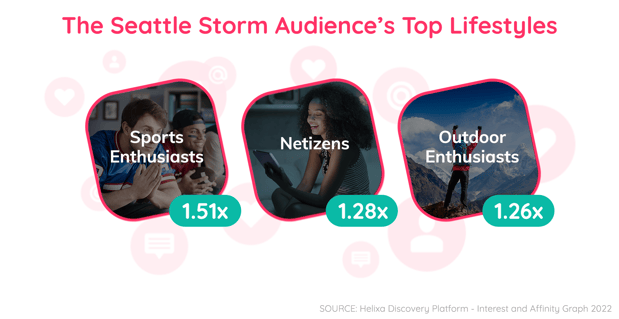 Interestingly, both disc golf and other outdoor sports brands are extremely popular with the Storm’s audience. This could open up opportunities for partnerships between more niche sports to potentially expand their reach. 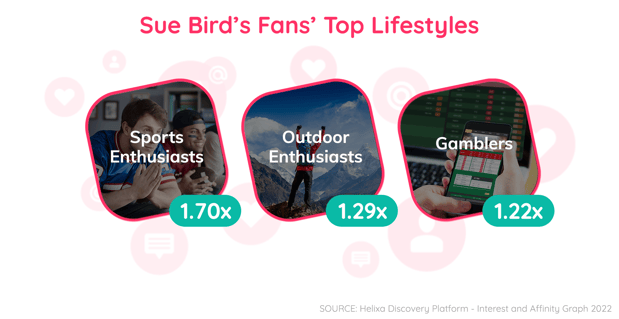 As sportsbooks and betting sites rush after their share of the fast-growing sports betting market, could partnering with a legend like Bird also help increase WNBA viewership? The most popular sportsbooks have high affinities with Bird’s audience, and so do the smaller brands — PointsBet is actually already partnering with the WNBA.

We recently discussed how the NCAA’s new policy allowing players to earn sponsorship money was a long time coming for an underserved market. The WNBA is positioned to provide a similar opportunity for both professionals and up-and-coming stars.

Both CapitalOne and Corona have bought into this line of thinking, working with the WNBA during this year's March Madness campaigns. There’s untapped growth in the WNBA that advertisers are beginning to become privy to. The ones that come in early and truly understand the nuances of this audience will also play a role in scaling the visibility of these star athletes — emulating the powerful star-producing revenue machine that the NBA has become.